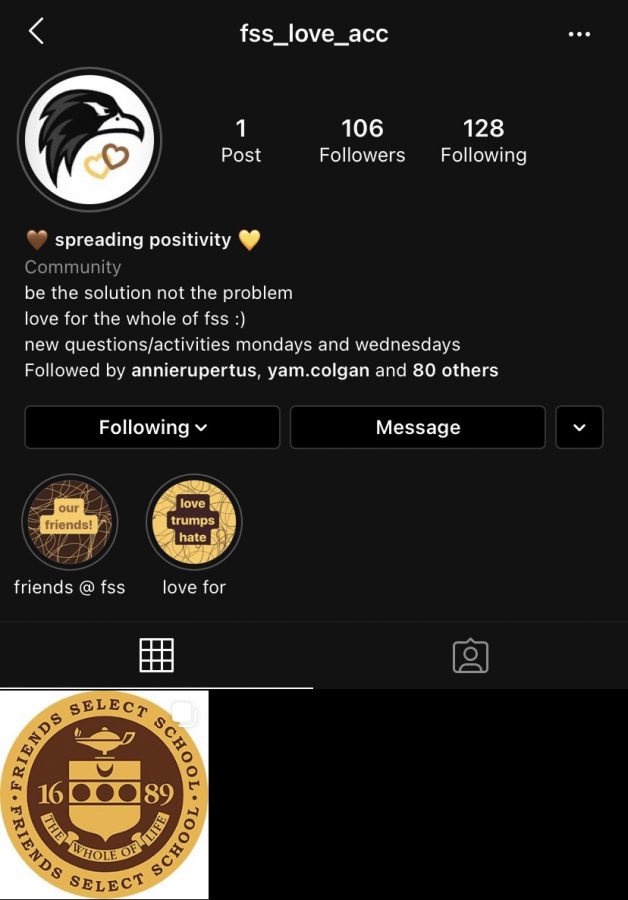 Over the past week, two separate Instagram accounts have sparked controversy and discourse in the Friends Select community: @fss_tea_page and @fss_love_acc.

@fss_tea_page, known colloquially as “the tea page,” is a gossip account that publishes anonymous submissions about students’ personal lives. The original tea page surfaced on Tuesday afternoon and was deleted within hours. A new account, created on Friday night, is still active and has 33 followers as of 4:30 PM on Monday, November 9th. The identity of the account’s creator is currently unknown.

Upper School Dean of Students Norman Bayard has issued multiple emails condemning the account, asking all students to “to report it to Instagram as inappropriate content (bullying and harassment).” Norman addressed the unknown account operator at the end of his last email, writing: “Tea Spiller, there are plenty of people here for you to talk to. Remember, all of the negativity that we put out will come back to us and those that we care about. Stop it. Your hurt will not be resolved by hurting others.”

Multiple students have already been hurt by submissions to the tea page. Both Henry Planet ‘23 and Elle DiBianca ‘22 report that they have been adversely affected by submissions regarding their personal lives. “I’m very hurt by the tea page because two things have been shared about me,” said Elle. “Those things are nobody’s business and they were very hurtful. I’d like them [the tea page creator] to be revealed or caught.”

Henry and Chris Crisden ‘22 have launched an independent investigation to unveil the tea account operator, but they have been unsuccessful thus far. “It’s out of our hands at this point,” says Henry.

Genevieve Raju ‘21 speculates that the account was started by someone outside of the school community. “Running tea pages for high schools outside of your state is a TikTok trend,” she says.

In response to the tea page, one anonymous Friends Select student created another account called “@fss_love_acc,” which seeks to spread positivity and friendship in the school community. This page, known as “the love account,” has quickly surpassed the tea page in popularity, amassing 104 followers in just three days.

Due to an overwhelming influx of submissions on Friday night, the love account will now publish a weekly kindness challenge that offers a biweekly prompt for community positivity. Monday’s prompt asked students to submit photos with friends and received twelve submissions.

“I think [the account] is really sweet,” says Scarlett Schneider ‘24. “Whoever made it had the right mindset of bringing others up instead of tearing them down. It’s nice that multiple students are getting mentioned.” Elle, Henry, and others agreed with Scarlett’s statement.

No teachers or administrators have released public statements about the love account.