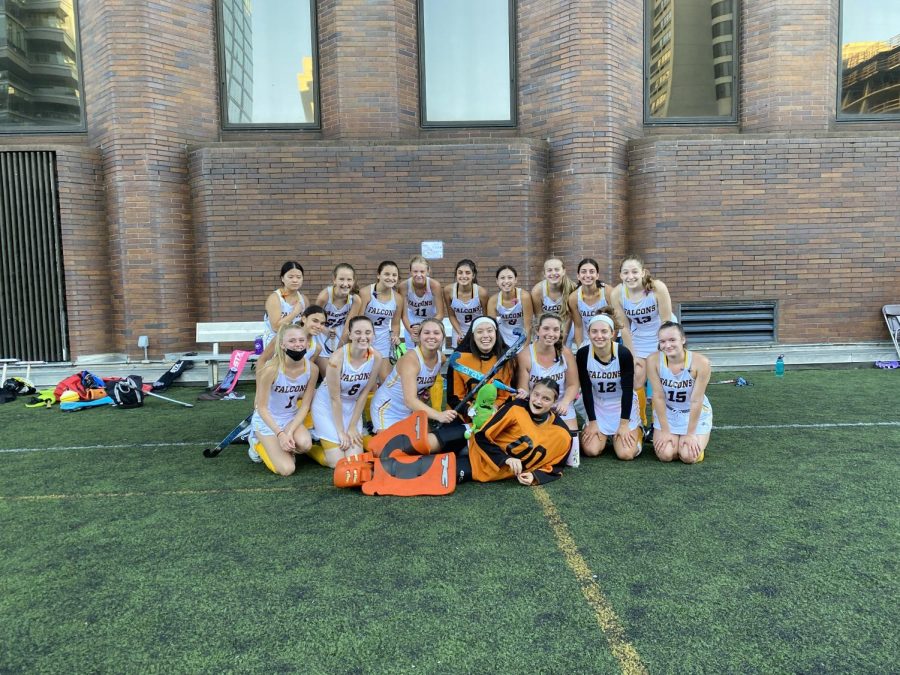 The Friends Select Field Hockey Team made it to the playoffs – their first appearance since 2007. Their last full season in 2019 ended with six wins, seven losses, and two ties. Their 2021 season finished with a record of five wins and six losses. The season had a rocky start: the team kicked off with four consecutive losses but turned things around to win five of their last six games. Ultimately, the team lost in the Friends School League semi-finals to Academy of the New Church, 6-1, but will be attending the state tournament at Springside Chestnut Hill Academy on November 5th.

The lack of a 2020 season created many challenges for the team. “We were all coming into this season not knowing what to expect at all,” explains Sami Giganti ‘23. Because of a year of no play, there were many new underclassmen stepping into starting positions, which meant the team had to learn how to play cohesively. As the season progressed, the team collectively defeated this challenge. Sami says, “I think we overcame it by working really hard together in practice, communicating on the field, and bonding together as a team outside of field hockey.”

Of eighteen players on the team, nine were freshmen and the other nine were a mix of sophomores, juniors, and seniors. Head Coach Emily Gallagher was impressed by the freshmens’ ability to adapt to a high school level of play. “They are able to hold their own and make a difference on the field when competing against more established teams,” she says.

Kate Gunther ‘25, one of the many freshmen on the team, felt a “really sudden change” between a middle school and high school level of play. She adds, “You also learn a lot in a short span of time which can be hard, but when it all clicks it’s super satisfying.”

Emily was extremely impressed with the amount of leadership by the upperclassmen, guiding and supporting a very young team. “You could see our team playing not only with each other, but for each other,” she explains.

Margot Schneider ‘22, one of the team’s captains, was also very impressed by the freshmen. “They’ve been awesome,” she explains. One memorable moment for Margot and Emily was an overtime win against The George School. Margot adds, “I think everyone was happy with that game.”

Emily says that the team rigorously prepared for the game and truly earned a win. She notes, “the game was certainly a pivotal point in our season.”

Something that was surprising but also crucial to the team’s success was the closeness of the team, according to Margot. “Of course I knew the girls and I was interacting with them, but I feel like I am legitimately friends with people who I was not friends with before,” she explains. Margot, being one of two seniors on the team, felt as though her relationship with the younger players would be largely through a leadership role, but she was pleasantly surprised to end up additionally becoming good friends with them.

The Friends Select team is going to the state tournament this Friday, extending their season for at least two more weeks. Emily is excited for the extra time together, as the team will have more practices to train and hone in on their skills. She believes that it will help them in preparation for the tournament and for future seasons to come.