Twelfth Night to Premiere This Week in Blauvelt Theater 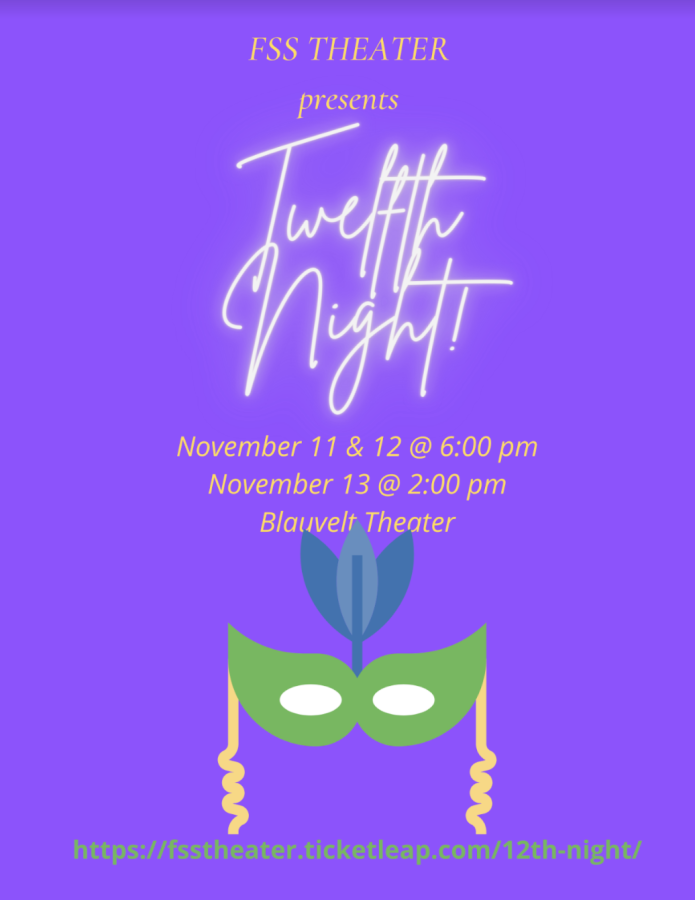 The Friends Select fall production, Shakespeare’s Twelfth Night, will bring complicated love stories, a clicking cast, and a detailed set to the Blauvelt Theater this Thursday, Friday, and Saturday.

“The show is a Shakespeare comedy about Viola and Sebastian who are twins that are shipwrecked off the coast of Illyria, and are separated… Viola must portray herself as a man to live in the home of Orsino,” explains Alston Abobi ‘22, who plays the role of Sir Toby. Alston encourages viewers to consciously track the different love interests and relationship dynamics in order to stay on track with the plot of the show.

Drama Department Chair and producer Donna Romero says, “Twelfth Night is about love, gender, and mistaken identity.” She saw a performance of this show a few years ago, which sparked the idea to bring it to FSS Theater. When a few students recently pitched the show to her in class, it “confirmed [her] decision.”

“Passion is the most resilient force in the world,” says Director and Friends Select alum Ang Bey, describing their director’s thesis. Ang brought a new idea for a setting to the show: New Orleans, Louisiana. “The city is woven through the play, literally in banners and t-shirts and most figuratively through the spirit of the characters. Blackness is a huge part of New Orleanian culture, so aspects of its influence are in the piece as well, specifically through music and dance,” they explain.

Sarah Gorenstein ‘24, a new student at Friends Select this year, explains, “The show has lots of ups and downs. There will be singing, dancing, acting, and even onstage fighting. We are using every aspect of the theater and the wonderful set – the show will be a party!” She recommends that viewers watch for original music, original set, and the “best of all the fight scenes.”

Being new to FSS, Sarah explains how lively and “under-represented” the theater department is. She has noticed students seeking out opportunities to perform. “It would be really cool in the future to see more theater-oriented classes or clubs like theater history, screenwriting, [and] play analysis,” she says. Sarah has grown to feel “safe and comfortable” within this community, playing the role of Olivia, the “fabulous dutchess who lives in a world of her own.”

Members of the show have commented on the growth and development of the cast as a whole. Jonas Gruber ‘22, the stage manager, says, “The process of a cast coming in cold at the start of a production, and over the months becoming closer and more comfortable with each other, it’s really remarkable. A big part of theater is exposing yourself… it’s great to see that that hasn’t changed, especially after the COVID era of theater.” As stage manager, Jonas facilitates conversation and connection between production staff and actors, “[making] sure everyone is on the same page about what needs to get done.”

Elena Milliken ‘22, a senior playing the lead role(s) of the split identity of Viola and Cesario, shares, “One of the coolest parts of the show is seeing people grow into their characters and find a way to make the performance their own… as we get more comfortable in the roles, we got to figure out how we would interact with each other or [create] little mannerisms that take it to another level.” As one of the few students who has performed in an in-person show during Covid before, she has taken on the role of checking in on her fellow actors and helping them “adjust back to rehearsals and the pacing of tech week.”

Donna agrees that the growth of the actors into their roles has been astonishing: “considering the limitations of acting with a mask, plus the challenge of mastering Shakespeare, they’ve done a remarkable job!”

All of the cast and crew members that the set has really made the show come to life.“The set is one of the most ingenious designs that I have ever seen for an FSS theater production. It literally gives the show a whole new level and brings a new vibe to the space… it wouldn’t be possible without Max and [the] stage crew team,” says Jonas. He also highlights the costumes and hard work of the costume crew.