Falcon Roundtable: Which Season is Best? 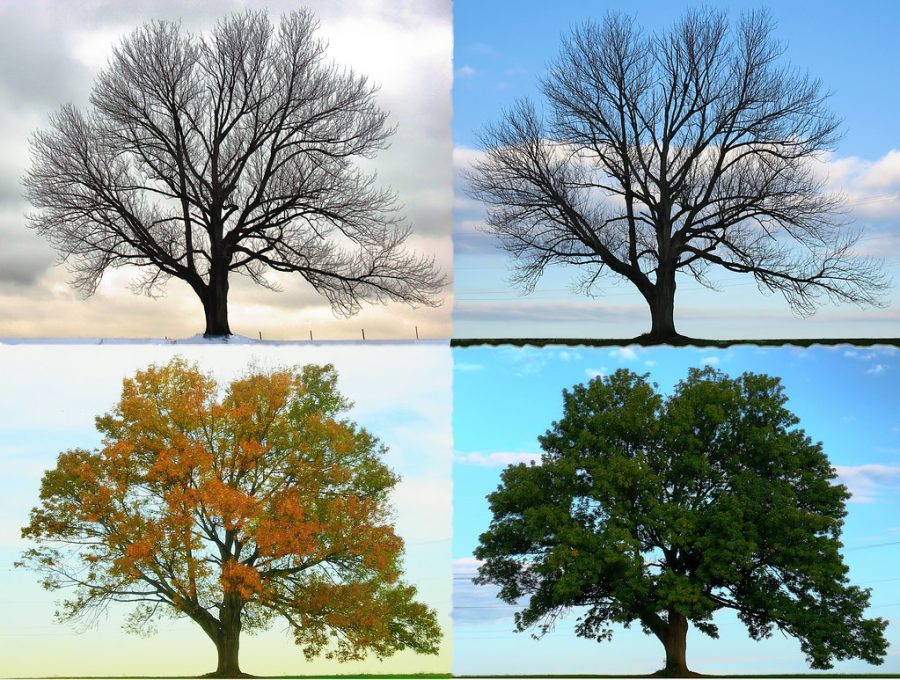 Imagine this. A person sits down on their couch after walking home from school through the snow. Their cheeks are red and puffy. It’s cold but not freezing. There is hot chocolate waiting for them at home. After drinking it and watching a Christmas movie, they get cozy under the covers as they watch the snowfall, and out their window, they watch as the snow amasses to a beautiful sea of tranquility piling ever so slowly and steadily outside of their window. That person then proceeds to have the best nap of their life. This is an experience you can only get in Winter.

To start, winter has the most holidays compared to the other seasons. According to the New York Times, “We actually are happier than usual on holidays. In fact, Christmas Day, though not celebrated by everyone, is the happiest day of the year by a significant margin. Spending time with our friends and family turns out to be a robustly positive predictor of our happiness.”1 Besides the positive social impact these holidays have, there is a major positive economic impact associated with them. According to the National Retail Federation, the average person is expected to spend around 1000 dollars during the winter holidays, more than any other holiday event.2 This massive economic activity is good for the economy and keeps money flowing. Even not on the holidays, every winter day has many benefits.

Winter’s weather is favorable because it allows you to layer up as much as you want, whereas the heat of summer and other seasons requires you to layer down to a certain point. And, even then, you might still feel hot. Additionally, colder weather and colder temperatures have been associated with referential creativity, the type of creativity where you think out of the box.3 Winter also leads to deeper, more restful sleep cycles because of colder weather and sunlight’s effect on your circadian rhythm.4

Winter also allows for many sports that cannot be played at any other time of the year like skiing and snowboarding, and to some extent hockey and ice skating.

During spring and summer, allergies due to grass, trees, and pollen affect over 60 million Americans, a problem which winter does not have.5 Spring advocates often try to argue that they have the best month of the year (May), but just because they have the most popular month doesn’t mean that it is the best season. One may argue that summer is the best season because schools have a Summer break and therefore families can travel more and do more activities. But, as previously mentioned, summer is extremely hot, humid, and sticky. Due to climate change, from now on every single summer this vexatious weather will only make the season more uncomfortable. It is also an arbitrary decision to put the longest break of the year during summer.

Winter is the best season, full stop. The holiday density, the lower temperature that allows you to layer up as much as you want and kills bugs, the health benefits from the cold weather, as well as the special moment of piling up a bunch of blankets and watching the snowfall proves that winter is the best season.

The erratic weather of the Northeastern United States is one of the worst things about living here. The dull and frigid winter sucks the life out of you and the muggy, torrid summer makes you want to stay inside with a fan or A.C. running. However, the weather during the spring is sublime. The moderate temperatures create the perfect hoodie and sweater weather and it is finally pleasant outside again as the cold embrace of winter finally loosens its grip.

There are scientific benefits to spring as well. The humidity level during the summer is often too high for sweat to evaporate. Because of this, the body is unable to effectively regulate its temperature and this causes increased chances of heat-related disorders like heatstroke. Paired with the extreme temperatures of summer in an urban environment, the heat index in Philadelphia often surpasses 95 degrees1 which can be very dangerous.2 In the United States alone more than 720 people die of heat-related illness each year.3 During winter humidity levels are low which can lead to dehydration, worsen skin conditions like eczema, and can impair your body’s ability to fight respiratory illnesses like Covid-19 due to damage to one’s mucous membranes.4 However, spring’s humidity level is in the optimal range of 20-50% where your body is able to cool itself down properly and mucus membranes are healthy and functional.5

The longer daylight following the spring equinox benefits us in many different ways. A study from Brigham Young University in 2016 found that there is a correlation between longer daylight hours and less mental distress. Not only does sunlight work as a mood booster, but it also benefits your memory and creativity. A study by the University of Michigan in 2005 showed that as you spend more than 30 minutes outside in the sunny spring weather will affect your brain: more open to new information and creative thoughts. Furthermore, spring is safer as the longer daylight reduces crime. A study by the Review of Economics and Statistics stated that the robbery rates fell when the daylight time is longer. Statistically, the robbery rate dropped 27 percent during that extra hour of evening sunlight.6

While many people suffer from tree pollen allergies in the spring and summer, the other seasons also cause issues for those that are allergic to other types of pollen. In fact, according to the Asthma and Allergy Foundation of America, the most common kind of seasonal allergy is ragweed pollen which is released during the fall and early winter.7

Spring is a happy medium between the more extreme climate of seasons like winter and summer. The weather conditions of spring also have many health benefits, from far lower chances of heat-related disorders and better resistance to respiratory illness to the mental benefits of the increased amount of daylight. Despite our views and evidence, this is a subjective argument. What is your favorite season?

Summer is undoubtedly the best season. There is warm weather in the summer, allowing for a variety of activities. Imagine being with family and friends on the beach, at an amusement park, at carnivals, playing outdoor sports, or even eating outside at restaurants. All of these activities are enhanced because there is the most light which allows people to be happy and stay outside longer.

According to YouGovAmerica, who surveyed 18-34-year-old Americans, the majority (30%), said summer is their favorite season.1 For the sector of the population that is in school, summer provides the most free time. Though there are breaks in winter and fall, summer break is the longest break of the year; there are no classes and no homework which gives students time to travel. According to TripAdvisor, “the most popular travel weeks begins June 21 and June 28, timed around Independence Day. Over two-thirds of Americans, about 67%, planned to travel this summer from June 1 to August 31.”2

There are also health benefits that emerge in summer. People have healthier diets in the summer. The season has higher temperatures which improve the growth and in turn the availability of summer crops. This includes mostly fruits and vegetables which lowers the difficulty of meeting the suggested intake of five portions a day. According to WebMD, “They [summer fruits] also boost the immune system and, because of their low-calorie count, help with weight loss. Most of summer’s fruits are bursting with antioxidants and phytochemicals (plant chemicals, many of which are thought to have a protective effect against cancer), as well as vitamins, minerals, and fiber.”3

Advocates for winter as the best season may highlight the joy of the holidays. However, that is only a portion of the season, and it collectively involves being indoors and a lack of sunlight. Proponents for fall and spring may also argue that there is too much sun during summer. But additional sunlight during the summer is good for people’s moods, through the supplement of Vitamin D. Seasonal affective disorder (SAD) is depression that gets caused when the seasons change. It usually begins during fall and reaches its height in the winter. As a result of receiving less sunlight, the human biological clock shifts. Our body clocks regulate mood, sleep, and hormones. When it changes, people may have trouble regulating their moods.

According to Cleveland Clinic, “Brain chemicals called neurotransmitters send communications between nerves. These chemicals include serotonin, which contributes to feelings of happiness. Since sunlight helps regulate serotonin, the lack of winter sun can make the situation worse.” Additionally, less sunlight has the possibility to create an overproduction of melatonin, which causes people to feel tired and lazy during the winter.4

Proponents for winter may also argue that sleep is increased in the winter, but summer has benefits for sleep as well. Summer limits the effects of sleep disorders. Being exposed to the sun’s light when first waking up can benefit people who suffer from insomnia. Sunlight allows the body’s internal biological clock to correct itself. University Family Medical Center says, “Sleep experts recommend exposure to an hour of sunlight between 7am and 9am each morning to help those who have problems getting to sleep at night.”5

Summer is the best and most versatile season as it offers activities for all ages, free time for students, and a myriad of health benefits.