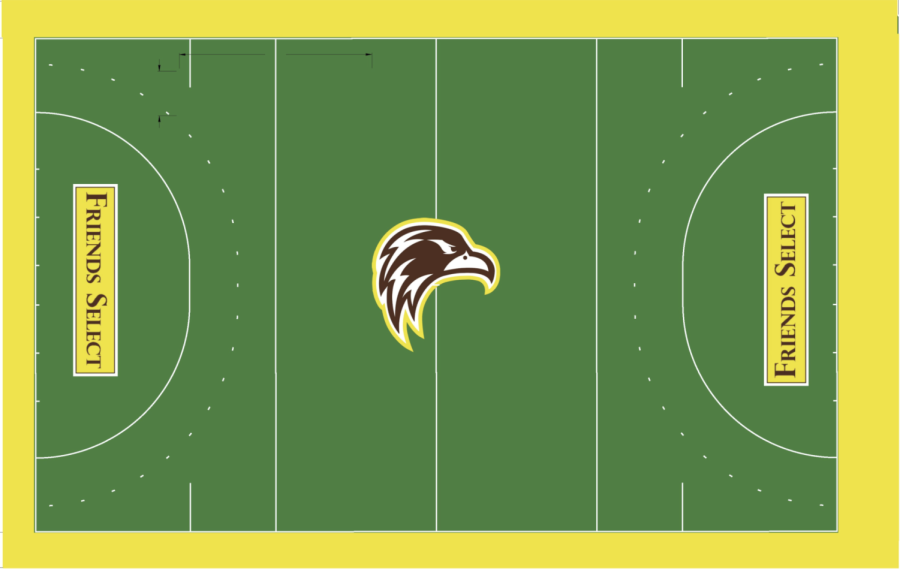 Friends Select’s turf roof is finally graduating. After about 17-18 years of the same turf, the school decided it is time for a remodel. The roof has served the FSS community greatly; it has been the site for countless sports games, practices, peace day assemblies, PE classes, movie screenings, and more. Friends Select’s rooftop is arguably one of the most unique features of the school, with its versatility and an incredible view of the city. However, most people who have stepped foot on the roof know how loose the rubber turf pebbles are and how it seems to magically travel into shoes and clothing, and therefore into students’ homes. This won’t be a problem with the brand new field. “We are getting the best turf for Field Hockey with organic filling (instead of the rubber pellets). The turf will be short and fast to play on,” says Athletic Director Bill Klose.

The construction doesn’t stop with the turf. Highlighting the other new additions to the rooftop, Bill explains, “We’ll have our new logos, add some gold coloring around the field, a brand new scoreboard, bleachers on both sides [of the roof], a new bathroom, some permanent seating/tables in one corner for a place to sit and eat, better and tighter screening around the machines up there, and an opening on the opposite end on the [equipment] closet to make it more useful.” The turf will also only have field hockey lines so it is strictly a field hockey field for any athletic games.

One key highlight about the construction is the switch from rubber infill to PureFill cork infill. According to FieldTurf, the turf company the school has contracted, PureFill cork infill is “a natural infill that is environment friendly and non-toxic. It is a recyclable and sustainable product that is harvested from the cork oak tree every nine years, without harming the trees.” This infill also prevents the field from heating up in hot weather. This switch was crucial to Friends Select’s commitment to being environmentally friendly.

As of February 2nd, the old turf has been completely ripped away and the new turf is being stored in rolls on the roof. There were setbacks due to the recent snow but the construction is set to be completed in about two weeks. Bill says, “I have loved the entire process. It’s been long and detailed, but the construction company has been asking questions every step of the way to ensure it’s exactly what we want. The new space will be able to be used by everyone in a better way. It’s not just a space for athletics, it is going to be a destination for events of all kinds now.”

Sofia Solari Parravaccini ‘23 shares her excitement for the new field: “As a field hockey player for the past seven years, I would say that the old turf was definitely a struggle at times for the team to play on since parts of it were ripping up and it was also slippery since the turf was so old. However, it still gave us a large advantage over other schools in our league to have a turf that we were used to. I’m glad that the field hockey team is being catered to, especially since we worked so hard this season and made it to the playoffs. It will be great to be able to play on a brand new field for my last year at FSS.”

Rae Asbridge, a PE teacher at FSS says, “After 20 years here at FSS, I look forward to no longer having to clean the black pellets out of my shoes!”

Mariko Cummings, A Friends Select Alum and the Varsity Girls Field Hockey coach, remembers the last turf installation. She says, “It took an entire full FH season to install, but afterwards it was so much more fun to play on than grass… Our rooftop field is such an attraction for other schools to come play [against] us. Some teams will always play an away game year after year just so that they can play on our roof and enjoy the view.”