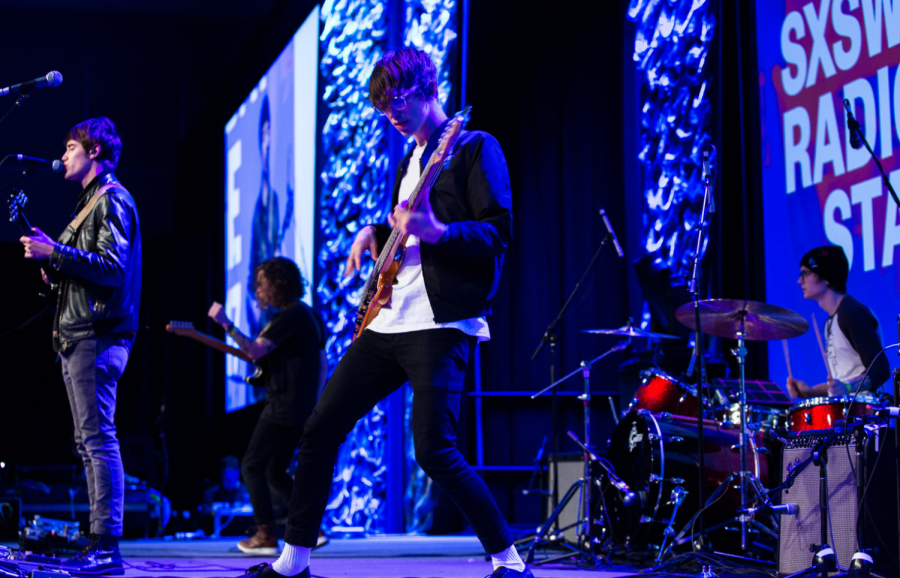 Hippo Campus’s newest album LP3, released this February, is full of energy, color, and lots of strange and satisfying sounds. After struggling to find their collective sound for some time, Hippo Campus strove for unity with this album rather than hyper-fixating on how readers would interact with their work, they explain on their Spotify page. I think, overall, this album is some of their strongest work and certainly shows the evolution of their group sound.

While many of the songs on this album have very different paces and energies, there is common tinting of the songs achieved by overlapping voices and harmonies, paired with artful voice distortion, which gives their sound a distinct edge. After having the opportunity to see them perform live, this became increasingly clear to me; while many of their older songs rely on the chaos of heavy guitar and drums coupled with clever lyrics, many of their new songs are more advanced and intricate, and the components of these songs fit together like puzzle pieces. Hippo Campus crafted a dynamic and intricate album with both variety and thematic threads.

That is not to say that their album is, what some might call, a “no-skip album.” Some songs are certainly stronger than others. LP3 opens with 2 Young 2 Die, an interesting mix of delayed downbeats and distorted trumpet sounds. This song is followed by Blew Its, a cleverly-worded and fast-paced tune that overlaps a rapid tempo with stretched out chorus lyrics – an interesting juxtaposition.

We then reach, what I believe, is the first real highlight of the album: Ashtray. Much of this song is monotone guitar chords with jarring instrumentation during the chorus. However, the short bursts of complex instrumentation combined with the ebb and flow of the energy within this single song make it stand out to me. Additionally, the lyrics are comical and clever, and a close analysis of them brings the song to a new level.

The middle chunk of the album – Bang Bang, Semi Pro, Ride or Die, and Scorpio, sort of blend into each other. Relative to the rest of the album, these songs are mid-paced, have similar vibes and catchy melodic themes, and plenty of satisfying guitar licks. However, they don’t stand out. Perhaps if they were spaced more strategically throughout the album, it would be a different story.

Then, we arrive at a standout, slow, and hypnotizing Listerine. This song starts with a series of eerie and understated chords and vocals, leaving you unsure of what to make of it. Introduce the muted but steady drumbeat. Next, queue the destroyed and somewhat creepy vocalization and lyrics which oscillate between clear and sharp sounds to fuzzier and distorted sounds. The prolonged monotone throughout the verses is puzzling but certainly draws you into the song. This song is an organized, slow, methodical jumble of sounds with quirky and funny lyrics. With each listen, I feel that I get something new from it. Characteristically, it seems to change time signatures at the end and clunkily shuffle to the next song.

The album ends with, what I believe to be, one of the band’s best songs to date: Understand. This 4-and-a-half minute anthem really sticks with me in its remarkable simplicity in comparison to the rest of the album, but also in the uncomplicated yet potent message of the chorus. The lyrics read: “I don’t care what we are, it just has to work. Where we end is something far, something hard to understand.” The lack of effects and distortion of the lead singer’s voice is almost jarring in comparison to the other songs on the album but seems to fit with the clean-cut message of the lyrics. Essentially, they say: whatever trials and tribulations we endure, this relationship is it for me. It has got to be the one. And for me, this song is certainly the one. This becomes especially evident in the momentary acoustic vibe that the song takes on before the final beat-drop and re-introduction of the chorus. The song fizzles out in a pleasant, calming guitar duet that caps it off beautifully.

Overall, this album is well crafted and dynamic. The flat sections are cancelled out puzzling, energetic, and moving songs that stick in your brain. The evolution of Hippo Campus’s work with time has culminated in this wonderful, strange, and catchy album – I recommend you take a listen!